I find myself repeating this often enough to (usually new) traders that I thought it helpful to just write a blog post on the topic.  Never buy UGAZ.  “But I want to go long on natural gas”, you say.  There’s plenty of smarter ways to do that, I reply.  This post explains why you should never buy UGAZ.  I will explain how I trade natural gas in a separate post.

You might want to skip this section as it isn’t necessarily important what UGAZ is.  Scroll down to the Rollover section if you are in a hurry.

Let us begin with an explanation of what UGAZ actually is.  The easiest way to understand it is it’s an exchange traded note designed to provide 3X leveraged daily positive returns against the S&P GSCI Natural Gas index.  You can obtain the prospectus and other facts from Velocity Shares here.  Observe it is a note not a fund.  In other words, it is a bond and the bond is supposed to move in price 3X the movement of the GSCI gas index within the day.  It doesn’t have to, although this minor difference is not why UGAZ is trash.  It only matters if you are worried that UGAZ might up and totally implode one day.  The answer is yes, it can and yes you will lose everything and no there is no one to sue, no assets to sell to get pennies back — it’s a bond, not a fund.

What is important is that bond which backs UGAZ returns is maintained by holding onto two types of assets: treasury notes and natural gas futures.  The value of UGAZ can drift fairly far from 3X during times when the treasury market is broken (illiquid).  But this is not the reason why UGAZ is trash, because it doesn’t happen all that often.

The timing of this is important.  UGAZ rolls during the second week.  UNG rolls during the third week.  Futures traders stop trading the current month and more actively trade the next month during the last week.  The exact date for the roll of UGAZ is not specified because the bond issuer doesn’t have to.  But you can, from the velocity shares website see what is being held, and if you check it each day you will know when it begins and ends rolling.  The dates for UNG are generally more prescriptive and you can see those in advance here.

Stupid Trader Mistake #1: Using the wrong month.  Trading platforms tend to switch over from the current to the next month 3-4 days before contract expiration.   So when you look at /NG on Thinkorswim for example, how that price moves is not necessarily how UGAZ will move the majority of the time.  The current and next month price movements are usually, but not always correlated.

The real reason UGAZ is trash is because it is a 3X leveraged ETN tied to a commodity that has a wickedly high daily average true range.  Natural Gas is just a volatile commodity and the more volatility in the price the more a leverage investment product will decay.

UGAZ will decay in price on average ~0.7% per day.

Let that sink in for a moment.  The price of UGAZ decays on average 0.7% per day.  Just look: 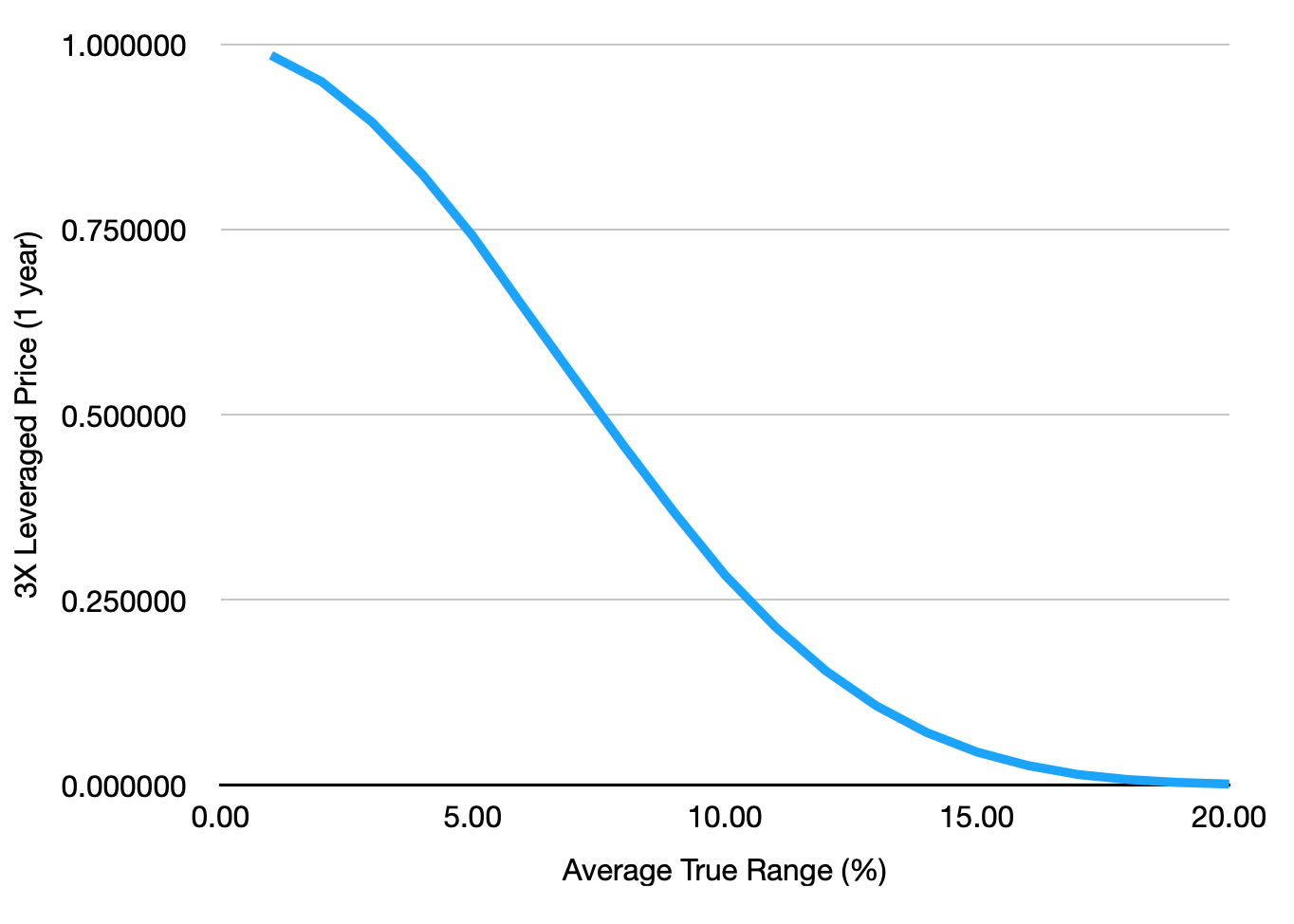 This experiment just takes a mythical asset and moves the price randomly for a given ATR for a whole year.  The experiment is repeated millions of times and the expected value is then estimated.  The expected value of the underlying asset will remain unchanged over this time.  But as you can see above, the expected value of a 3X leveraged investment product tied to that asset will decay to zero.  The real ATR you can get from your charting software.  You’ll see that it varies over time as natural gas goes through periods of being more or less volatile.  But the fact that ATR is generally high for natural gas means holding onto a leveraged investment product tied to it for any length of time is risky business.

Stupid Trader Mistake #2: Holding onto a losing UGAZ position hoping it will ever return to your entry price.  You might get lucky and it will quickly return to your entry price, but the longer you are “holding the bag” the less likely it becomes.  I did this analysis over the life time of UGAZ.  If you are holding a bag for one month your chance of recovering your entry price is 75%.  This last year has been more volatile and more downward in trend for Natural Gas.  For this past year, holding onto a UGAZ bag one week leads to a 77% chance of recovery; for one month drops those odds to 50%; two months it drops to 29%!  Summary lesson: quit dreaming you’ll get your money back — you won’t.

Stupid Trader Mistake #3: “But I want to ride the trend and compound my gains”, you say.  Suppose you get lucky and do pick the right time to go long on natural gas and don’t become a mulit-day bag holder.  Yes, you will see some compound gains, but if you are that good at picking the right time to go long on gas you can choose other leveraged approaches that will magnify your gains even more and not expose you to leverage decay.

In conclusion, UGAZ/DGAZ are trash.  Traders should steer clear.  If you want to buy UGAZ (or DGAZ) the futures are the way to go.  They require less capital.  They don’t decay.  They are what you indirectly are trading with UGAZ/DGAZ.  As for me personally, I prefer a simpler approach to trading gas (option selling) which I’ll describe in a later post.